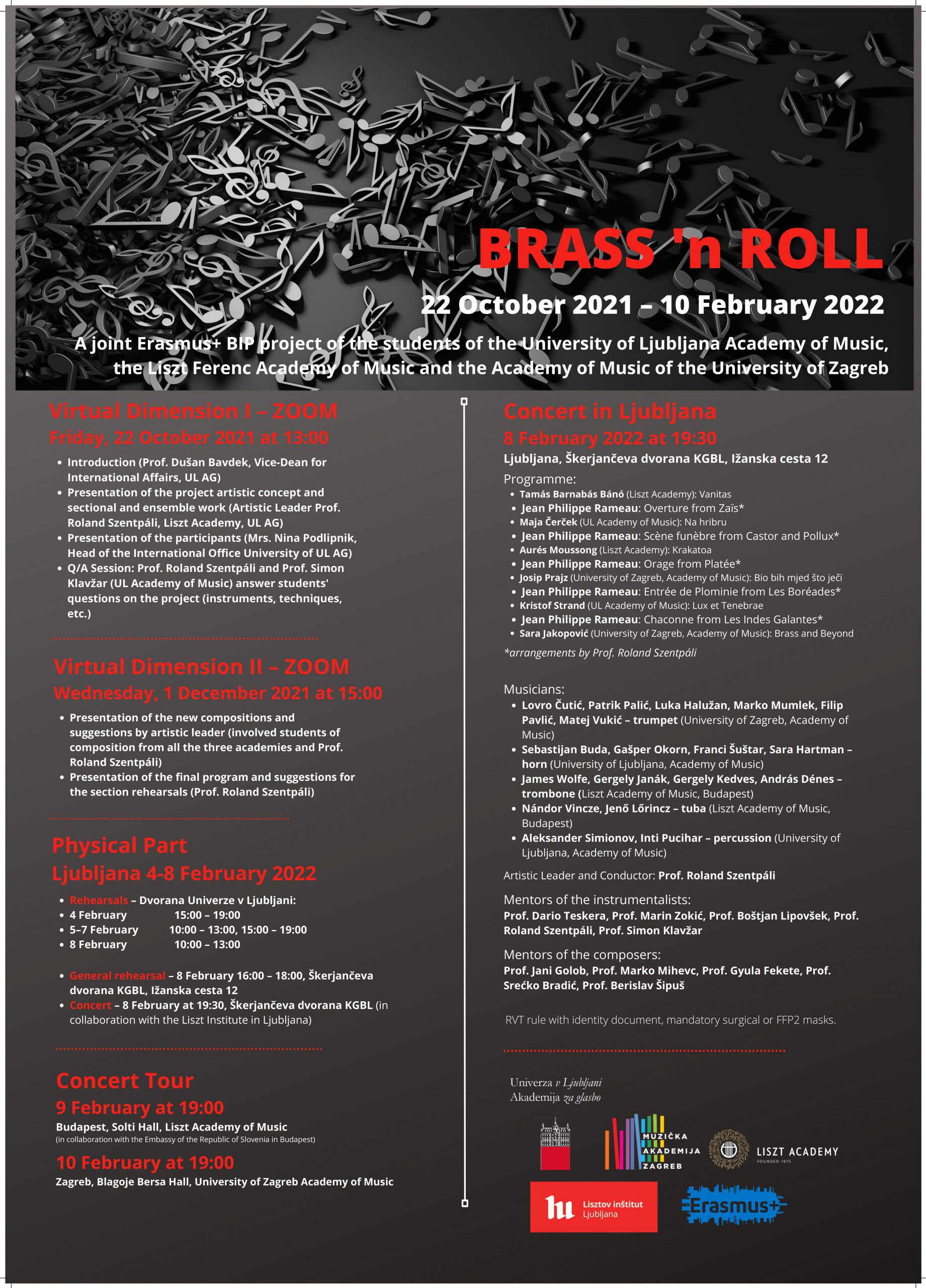 Tamás Barnabás Bánó: Vanitas – the maiden danced to death
The title Vanitas means a symbolic work of art showing the transience of life, the futility of pleasure, and the certainty of death, often contrasting symbols of wealth and symbols of ephemerality and death. In my piece, I tried to capture a moment of earthly delights in the form of a grotesque dance. There’s a Hungarian folk ballad called the maiden danced to death, in which a girl is pursued to dance all night with bandits in a tavern until she fell to the ground dead. This is the scenario of my piece. The core musical idea was to divide the instruments into two groups, which opened possibilities to try acoustic games within the material. I used less extended techniques during the composition process, but furious rhythmic games, dynamic changes, and straightforward musical lines, which are very suitable for brass instruments.

Maja Čerček: Na hribru (On the hill)
Let’s go to a place where the past intertwines with the present. Take moments of happiness from the past, keep them, and from them try to create newer, nicer moments in the future. Let’s remember the bitter flashbacks from the past and learn from them. Let’s develop in a direction that is dictated by our destiny and not forget about hope, which must never die. Let’s resort to nature, observe its patterns, and imitate them, for they are never wrong. Let’s hope unstoppably, live fairly, love honestly and create well.

Aurés Moussong: Krakatoa
The work takes its name from the Indonesian volcano Krakatoa, which erupted in 1883, recorded as one of the deadliest volcanic events in history. Somehow the work has a programmatic character, evoking the movement of the contained magma, its slow and increasingly tense ascent, until the destructive explosion followed by the precipitous flow of lava, which eventually cools down. The work is divided into two contrasting parts. For the first section, the evocation of the volcano suggested rich ideas and materials such as extreme lower registers exploration, fast and unstable dynamic changes, extended techniques for more dense texture, etc.

Josip Prajz (Music Academy Zagreb): Bio bih mjed što ječi
The inspiration for composing the composition “Bio bih mjed što ječi” (I am only a resounding gong… ) was given to me by the verses from the Epistle to the Corinthians by Paul the Apostle (Corinthians 13). The composition consists of an initial (and final) quiet section characterized by long tones with a fade in and fade out effect, resembling waves. A characteristic interval of the perfect fifth appears, as an homage to Bruckner and the beginning of his 4th symphony. The central sections are a contrast to this, and these are typical fortissimo sudden continuous beats (pulsations) and dense and deep tonal blocks (verticalization). The central section of the composition is reserved for overtone series glissandi and percussive sound in aleatoric form. Formally, a palindrome-like shape can be seen.

Krištof Strnad: Lux et tenebrae
The piece tells the story of light and dark. I tried to capture the concept that describes how obviously opposite or contrary forces may actually be complementary, interconnected, and interdependent in the natural world, and how they may give rise to each other as they interrelate to one another. The piece starts with sunrise when the sun caresses the darkened parts of the ground with its beams of light and ends with sunset when those beams disappear in the orange sky until the dark completely overtakes it.

Sara Jakopović: Brass and Beyond
Piece Brass & Beyond is exploring brass ensemble with all its possibilities: strong fortissimo choral sections with the use of flutter tongues, shake, glissandos, as well as contrasting pianissimo sections with the use of air sounds and extended techniques such as tongue stops, blowing air through reversed mouthpiece, etc. However, there are also moments in score in which music slightly transcends my focus on brass techniques, such as voice-only sections leading to pianissimo etheric sections, in which boldness of brass is replaced with soft and poetic net structure. The contrast between robust and gentle, soft sections is accentuated throughout the piece, finishing with the playful finale in odd meter.

Prof Roland Szentpali’s comment on the pieces by Jean Philippe Rameau
These opera excerpts were selected from Rameau operas. This two movements have different characters just like the 6 new compositions of the young composers, so I thought it just fits perfectly in between the new pieces.

With this concert programme composers, brass professors, and students intend to emphasize the sophisticated and classical character of brass music. The objective is to show the audience the variety of feelings, emotional content that can be expressed and the diversity of sonority that can be produced with these aurulent instruments.

New compositions by students of composition from the three academies and the comprehensive arrangement of Rameau pieces for brass ensembles prove that brass music has its valuable place in today’s concert life as well.

The University of Ljubljana Academy of Music, the University of Zagreb Academy of Music and the Liszt Ferenc Academy of Music nourish a long-term professional relationship. This joint project is one special example of the flourishing cooperation between the three higher music education institutions related to one another with so many professional cultural and historical bonds. The BRASS’ N’ ROLL project is realized in the framework of the Erasmus Blended Intensive Programme in which the involved students and professors took part in several online courses and workshops followed by an intensive rehearsal period in Ljubljana before performing the concert programme in Ljubljana, Budapest, and Zagreb.