SESSION 3: Musicology in the Expanded Field

Croatian Academy of Sciences and Arts, Division for the History of Croatian Music

How to Make Musicology More “Visible” with Help of Radio

This paper is going to try to answer one of the proposed questions, namely, who are musicology audiences today? Assuming that the radio listeners make up the majority of today’s musicology audience, the paper proposes one way to make scholar musicology papers accessible to them. Based on more than 30 years of experience in applied musicology (as an editor for Croatian Radio) and researching and writing scholarly musico­log­i­cal articles (in the fields ranging from instrumental music in Croatia in the 17th Century to music on the radio) the author of the paper shares and argues the idea (already tested in eight years of practice) of broad­cast­ing scholarly musico­logical articles instead of trying to make them pop­ular, easy to listen to by retelling them or discussing them with their authors (two of the main for­mats of a radio programme). The paper gives arguments for the accept­ability of using scholarly papers in the domain of applied musicology (such as a radio programme) in order to reach the broader audience than could ever be reached only by printing them in spe­cial­ised journals (although they are now available on the internet). The paper proves that with this format of present­ing the scholar musico­logical articles, audiences could not only broaden their interest in musi­col­o­gy, but also, musicology could arise as a science. Alt­hough there are many research papers about music broadcasts on the radio published in the last thirty years, they are focused mostly on the various types and gen­res of music (Doctor & Carpenter 1996; Doctor 1999; Čunko 2012), very rarely, if ever, is there research on various types of textual presen­ta­tion of the music in the radio broadcasts. In that respect this paper relies on the author’s own research on the subject and the article Klassische Musik im Radio by Oemichen and Feurstein (2006).

Tatjana Čunko graduated in Musicology and Music Journalism from the Zagreb Academy of Music in 1986, where she obtained her master’s degree (MSc) in 2004. with the thesis Instrumental Music in Croatia in the 17th Cen­tury and earned her doctoral degree with the thesis Croatian Music and Croa­tian Radio. She has been an editor in the Croatian Radio Music Department of the Croatian Radiotelevision (HRT) since 1986 (from 2001 to 2004 an Edi­tor in the Classical Music Department). Aside from her editorial and author­ship work on the radio, she has published scholarly articles in the Arti musices journal (since 1996) and in the Proceedings of Croatian Academy of Sciences and Arts (2005), in Proceedings of the International Musicological Sympo­si­um Krsto Odak – Life and Opus (1997), Music and Heritage. Essays in Hon­our of Dr Lovro Županović (2002), Music of Transition. Essays in Honour of Eva Sedak (2009) and in Croatian Music in the 20th Century (2010). She is one of the editors of the monograph Varaždin Chamber Orchestra 1994-2004 (2004), the author end editor of the monograph Varaždin Chamber Orches­tra 1994-2014: Two Decades of Enthusiasm (2014) and she contributed to the mono­graph Eight Decades. 1930-2010. Croatian Radio­television Symphony Orches­tra (2010). Since 2019 she has been a lecturer at the Zagreb Academy of Music, and since summer of 2020 a researcher in the Division for the History of Croatian Music of the Croatian Academy of Sci­ences and Arts.

From Ladislav Šaban to the Future of Slovenian Organology

In 1980 Ladislav Šaban, a prominent Croatian musicologist, published a pa­per on organs in Croatia made by Slovenian organ builders. His out­stand­ing contribution represents a triple milestone, at least. Firstly, for him, a final outline of the study started with J. G. Eisl ten years before at the very inception of the Musicological Institute at the Academy of Music in Zagreb. Secondly, the first research paper on organs for Slovenia after the WW II. And thirdly, for the musicology of the area, a thorough meth­od influencing structure and wording of future texts on pipe organs. Two researchers followed his achievements in Slovenia: his graduate student Milko Bizjak, and Dr Edo Škulj, professor emeritus, still active in the field today.

The presentation shortly displays analytical milestones in Slovenian organ research. Beginning with the oldest known critical treatise concerning Ljubljana cathedral organ by Frančišek Križman in 1762, we proceed with the surveys of organs in Maribor and Ljubljana dioceses at the beginning of the 20th century and finish with the mutually interconnected book Orgle Slovenije (Slovenian Organs) and web page www.orgle.si (2018).

Special attention will be given to the future and so-called digital humanities in organ research, which the institute Ars organi Sloveniae has been developing since 2005 and is summarised in the mentioned book-web hybrid. By its structure, the digital approach does not differ from Šaban’s fundamentals or the paradigms of his followers. What distin­guishes considerably is the effectiveness of data survey and organisation, a capacity of the advanced analyses, and an openness for syntheses and visualisation using digital tools. The experience of our institute shows that the attractive interpretation of scientific results accompanied by ac­tive communication can raise awareness for organ and organ music in society. Community feedback, on the other hand, initiates and contrib­utes to the direction of needed research activities.

Jurij Dobravec finished education in biology at Ljubljana University in 1993. During his university study, he attended the Ljubljana Organists school for four years, receiving music-history and organology lessons in the class of professor Edo Škulj. Later on, in parallel to managing the Science and Research department at the Triglav national park administration, he volun­teered as a choir conductor and church organist, and in 2005 estab­lished a national organ database managed by a non-governmental institute Ars organi Sloveniae. In 2018, in co-authorship with Dr Škulj, this comprehensive data system summarised into an innovative complex of the printed book Pipe Organs of Slovenia and web page www.orgle.si. Besides other activities, Dobravec participated in the Slovenian part for the inter­national Organ dictionary, published in 2015 in 23 languages, while his articles on the organ and results of musicology research appeared in profes­sional publications like Acta organologica, Cerkveni glasbenik, Arhivi, Informazione organistica, Varstvo spomenikov, Ars Organi, ISO journal, Ecce organvm! and others.

Department of Musicology, Faculty of Arts1・Faculty of Computer and Information Science2, 4, University of Ljubljana1, 2, 4・independent researcher3

The basic etymological interpretation of crisis stems from the Greek κρίνω: to ‘pick out, choose’, ‘decide disputes’, ‘decide a contest’, ‘ad­judge’, ‘judge, give judgement’, ‘estimate’, ‘expound, interpret in a par­tic­ular way’, ‘bring to trial, accuse’, ‘pass sentence upon, condemn’.

As the root κρίνω suggests, it is an action of picking up, choosing or decid­ing, preferring, determining. Today’s choices of music research may be sche­matically summed up as follows (on the next page). The scheme raises an omnipresent question in music research: “Who sells knowl­edge on music to whom?”. The contribution offers a historical sketch of the com­putational musicology in Slovenia that traces different levels, and levers, of music research pointing to a rathe banal fact: why have been musicologists accepting only certain forms of computer-as­sisted music analysis while the concept of “big data” analysis of musical facts remains outside of ethno/musicology?

Leon Stefanija (Ljubljana 1970) is a professor of musicology at the Faculty of Arts in Ljubljana. He served as the chair of systematic musicology, between 2008 and 2012 also as the chair of the Department of Musicology. His main research interests and teaching areas are the epistemology of music re­search, sociology of music, and history of contemporary, primarily Slovenian music since 1918. He cooperates regularly with the Music Academy in Zagreb, Faculty of Music Belgrade, University of Graz, Music Academy in Sarajevo, and Ballet College in Ljubljana.

Matevž Pesek is an assistant professor and a researcher at the Faculty of Computer and Information Science, University of Ljubljana, where he re­ceived his BSc in computer science in 2012 and his PhD in 2018. He has been a member of the Laboratory of Computer Graphics and Multimedia since 2009. His research interests are music information retrieval, mu­sic e-learn­ing, biologically inspired models and deep architectures. He has also re­searched compositional hierarchical modelling as alterna­tive deep trans­parent architectures, and music multi-modal perception, including human-computer interaction, and visualisation for audio analy­sis and music gen­eration.

Vanessa Nina Borsan is currently a master’s student of Music and Sound Computing at the Pompeu Fabra University in Barcelona. She graduated at the department of Musicology University of Ljubljana, where she also got her master’s degree in 2020. Her master’s thesis incorporated a com­pu­tational approach to research music patterns of Slovenian lied in-be­tween the two World wars. Her main research focuses on Western music of the 20th century, digital and applied musicology.

Matija Marolt is an Associate Professor and the Head of La­bor­atory for Com­puter Graphics and Multimedia at the Faculty of Computer and In­for­mation Science, University of Ljubljana. His research interests in­clude mu­sic /audio information retrieval, computer graphics and visual­i­sa­tion. He focus­es on problems, such as melody and rhythm estimation, au­dio seg­men­tation and organisation, and search and visualisation of music collections. 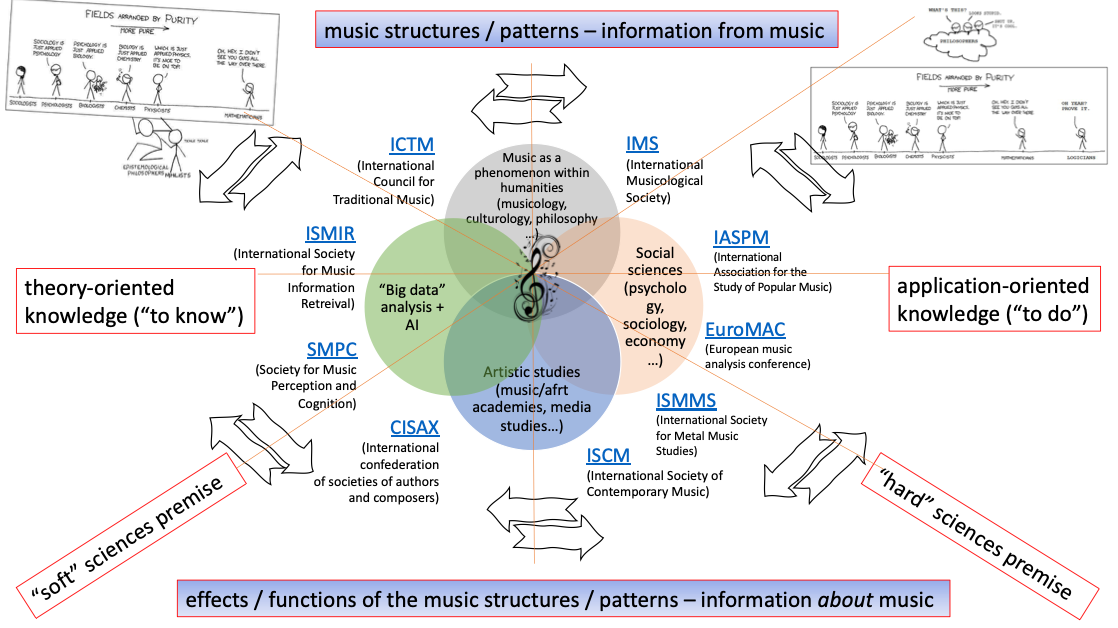